General counsel have become increasingly emerged in their organization’s technology landscape, and a new FTI Consulting report highlights the extent that engagement has grown in recent years. The survey represents the final leg of a three-part initiative entitled “The 2022 General Counsel Report: Leading with Endurance Through Risk, Culture and Technology Challenges.”

According to the consulting firm, fully 97% of general counsel surveyed in the study reported involvement in their firm’s tech ecosystem. “Technology modernization and law department transformation have continued to evolve as critical priorities for in-house counsel,” said Wendy King, a senior managing director within FTI Technology.

The annual study, which takes a deep dive into the workings of corporate legal departments, was conducted in partnership with software firm Relativity. Insights in the report include those generated by interviews conducted by Ari Kaplan with large corporations’ top legal officers.

“Part 3 of this year’s General Counsel Report highlighted several interesting developments on the technology front, but most of all was the emphasis that technology issues increasingly fall on the GC’s shoulders alongside a myriad of additional responsibilities,” King said. “To maintain the endurance needed to face the endless list of demands and risks, general counsel will need to invest in technology road-mapping, training and adoption programs for their teams and analytics tools to effectively do more with less.” 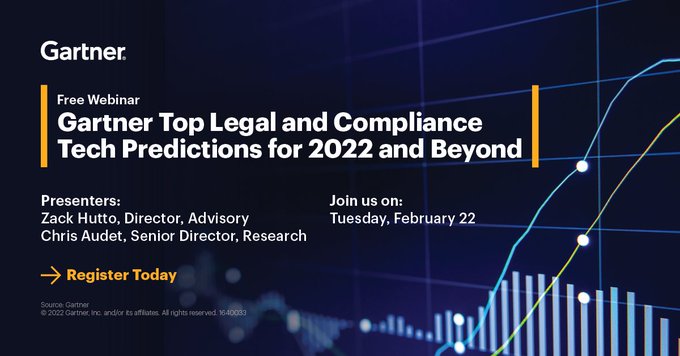 "#IN Corp #legal and compliance departments must accelerate technology adoption amid extraordinary legal technology market volatility Join @Gartner_Legal’s upcoming #webinar to know the tech advancements and market changes coming in 2022 and beyond:…"

According to FTI Technology, 87% of the counsel interviewed said they are “heavily involved” in the planning and purchasing of technology outside simple budgetary considerations. This level of involvement has increased 13% over the last two years, largely due to an enhanced role for counselors and an increase in staffing.

Additionally, the COVID-19 pandemic was cited as a catalyst accelerating the adoption of new technologies, with 43% of those asked indicating that was the case for their organizations.

However, only one-third of the general counsel surveyed agree attorneys have “adequate technology knowledge and capabilities.” This represents a 20% decline over last year’s tally, notes the consulting group.

“The results of the third annual edition of The General Counsel Report indicate the era of the ‘TechnoLawyer’ continues, with the overwhelming majority of chief legal officers reporting substantial involvement in technology planning—something they may not have anticipated while studying torts in law school,” according to David Horrigan, Discovery Counsel and Legal Education director at Relativity. “We did see a year-over-year decline in the assessment of attorney technical competence as well as only limited use of artificial intelligence. However, with many of the chief legal officers in the report recognizing the growing need for tech-savvy lawyers and some seeing the potential value of AI to corporate legal departments, the worlds of law and technology continue to merge.”