ABA Midyear Meet Honors Diversity in the Profession, Tackles Injustice in the Courtroom

The importance of racial equality in the justice system, challenges stemming from implicit bias and a host of other salient legal issues will be the focus of this year’s 2022 American Bar Association (ABA) Virtual Midyear Meeting.

This year’s gathering will take place virtually from Wednesday. Feb. 9 to Monday, Feb. 14, according to the trade association. Specifically, the impact of Kenosha’s Kyle Rittenhouse trial, eminent domain as it pertains to Black landowners and a ceremony for legal professionals who have advocated for ethnic and racial diversity in the field are all on the docket for the midyear meet.

The latter includes celebrating five recipients of the 2022 Spirit of Excellence Award, which will feature, among others, Oregon Supreme Court Justice Adrienne C. Nelson and Washington Supreme Court Chief Justice Steven C. González. “I am inspired by the work of this year’s awardees and excited to be a part of the award ceremony that will highlight each awardee’s stellar work,” said Michelle Behnke, chair of the Commission on Racial and Ethnic Diversity, in the Profession in a statement.

The awards will be presented Saturday, Feb. 12, as part of the nearly week-long celebration. In addition to Nelson and González, Gabriel S. Galanda of Galanda Broadman; Kay H. Hodge of Stoneman, Chandler & Miller LLP and Carlos E. Moore of The Cochran Firm–Mississippi Delta will also be honored.

“These awardees have blazed trails and have encouraged and supported others to succeed. Most importantly, these awardees highlight for the world that diversity, equity and inclusion is not mutually exclusive to excellence, grit and determination,” Behnke said. 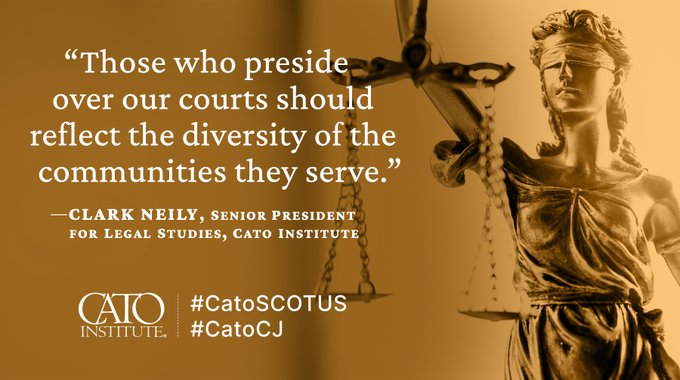 "The importance of diversity in the legal profession generally and among judges in particular deserves more attention—Americans deserve a federal judiciary that is representative of the communities it serves. LEARN MORE: https://fal.cn/3lHIK #CatoCJ #CatoSCOTUS"

According to the ABA, Nelson is Oregon’s first Black justice to sit on its Supreme Court. Further, she was only the second female Black judge in the history of the state and was honored for her accomplishments by a local high school now bearing her name.

“The opportunity for high school students to speak with and interact with an African American woman who is not only a local community member but who also sits on the state’s highest court is one we should not pass up,” reads a 2018 naming recommendation from the North Clackamas School District. “A middle school student passionately told the committee, that as an African-American young woman, she finds it difficult to go to a school where she doesn’t feel that African-Americans are recognized publicly. She asked the committee to strongly consider naming the school after a prominent African American.”

González has served on the Washington Supreme Court since 2012 and was recently elected to a four-year term as its chief justice. At one point in his career, he worked as a domestic violence prosecutor in Seattle as well as a judge on the King County Superior Court.

Among some of the other panels to be featured at the conference include:

Finally, the organization’s policymaking body, the ABA House of Delegates, is set to meet on the final day of the conference to debate and vote on a number or proposals pertaining to the legal industry.